The 2015 season was a very important step for the Tennessee Volunteers. The season wasn’t without heartbreak. Tennessee suffered four tough losses; all coming after the Vols had a chance to win in the fourth quarter. But despite the disappointment, the Vols season was their best in a long, long time. Butch Jones and company took the next step, going from an up-and-coming team to a team primed to compete for a championship in 2016.

As we enter an offseason without football, I thought it would be fun to go through a series of posts reflecting on the Vols’ 2015 season. Starting today, we are going to be counting down the top 35 plays of the 2015 season.

If you look at this play out of context, it doesn’t look all that impressive. A touchdown scored with eight seconds left in a thirty-two point game is all but meaningless. But if you are a Vol fan who followed along with the 2015 season, this touchdown was special. It was the exclamation point to the season. The knockout punch in a blowout victory over the #12 team in the country. The icing on the cake to the best season Tennessee has had since 2007.

With a mere 24 seconds remaining in the season, Northwestern was going for one more touchdown. They had run a pass-first, no-huddle offense all the way down the field and were looking to add one more score to pad stats before time expired. Tennessee, with all backups in the game, had given up multiple completions through the drive, and the Wildcats had advanced to the 13 yard line.

On this second and ten play, Northwestern lined up in an empty backfield with three receivers split right and two split left. Vols’ defensive coordinator John Jancek countered with a 4-2-5 nickel formation and quarters coverage.

“The corners will align about five to seven yards off the ball. The corners will lock on to the number one receiver (closest receiver to the sideline on each side of the field) on any vertical routes. As long as the number one receiver releases vertically, the corner will carry his route. Should the receiver release on an underneath route, the corner pass him off to a linebacker. The corner must move his eyes to the number two receiver (the second receiver from the sideline) and help the safety by bracketing any vertical route.

“The two outside linebackers are responsible for covering the flats in pure zone coverage. The inside linebacker will cover the hook zone over the middle. He must wall off any crossing routes. These underneath zones are where the defense is most vulnerable, but even that is by design. The defense aims to use the zone to keep everything in front and avoid giving up the big play.

“The reads of the defensive backs turn quarters into a coverage that is adaptable to any route concept. This is why quarters is so popular. It is not a static, spot-dropping zone, but rather a read-and-react coverage. It can be molded on the fly to defend any formation and any route concept an offense could conceivably run.”

Versus an empty formation, Jancek and the Vols had to make an adjustment. Quarters is designed to cover up to four receivers releasing vertically downfield. When the offense lines up with a running back in the backfield, this works. The back is not a vertical threat. But when the offense lines up with five receivers on the line of scrimmage and no back in the backfield, the defense can only cover four of the five receivers on vertical routes.

Jancek has a check in his playbook designed just for empty formations. This check called for the strongside corner (in this case, Max Arnold, #46) to play MEG coverage. MEG stands for “Man Everywhere he Goes”. This means that Arnold is responsible to cover his receiver in tight man coverage no matter what.

With Arnold locking his man down, the other four defensive backs (corner, nickel, and two safeties) can play base quarters coverage over the remaining four receivers. This leaves two linebackers to play the underneath zones.

So now that we understand what coverage the Vols were in, let’s look at Northwestern’s play call. The Wildcats went with a route concept called shallow cross. This is a quick hitting route concept, designed to attack over the middle. The quarterback’s first read is a shallow crosser, coming from the weakside. The second read is a deep in route, coming from the opposite side. This should create a vertical stretch over the middle of the defense. The remaining three receivers run vertical routes to open up space underneath.

So now to the play itself. Let’s look at the play of the Vols’ two linebackers, weakside backer Cortez McDowell and middle linebacker Colton Jumper. McDowell sees right of the bat that the slot receiver to his side is running an underneath crosser. He plays with outside leverage because he has inside help. McDowell then follows the receiver across the field.

Jumper reads a vertical release from the number three receiver to the strongside. Jumper plays with great technique here and reroutes the receiver. Jumper is able to get both hands on the receiver and shove him outside, serving to disrupt the timing of the route. On the back end, Berry is responsible for this receiver if he releases vertical. Berry reads the deep in route, and gets very good tight coverage on the receiver. 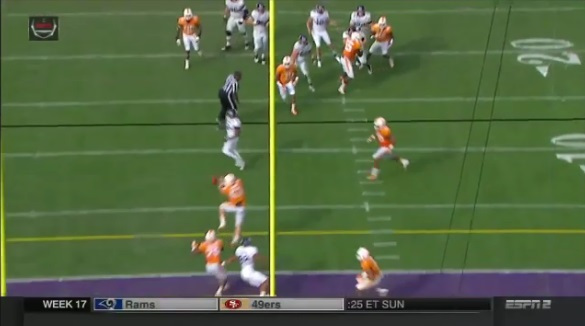 After that, it was over. Berry, an All-American kick returner, proved that he was the easily the fastest player on the field, and 100 yards later he was in the end zone celebrating a touchdown.

Maybe what I love most about this play is the effort shown by senior defensive end Chris Weatherd. Look at him in this shot here, at the forty five yard line, serving as Berry’s lead blocker. This is outstanding effort by Weatherd, and is symbolic of the team-first mentality. Weatherd sprinted forty yards downfield in order to make a block so that his teammate could score. That’s awesome.

Half the team sprinting on the field in celebration tells the whole story. This play was the exclamation point on a decisive victory over a very good #12 Northwestern team. This play placed a smile on the faces of Vol fans across the nation. Berry’s pick six was very symbolic of the Vols’ season as a whole. Tennessee football has finally returned to its standing among the nation’s elite.

Be sure to check back later this week to find out what play came in at number 34 in our countdown. You can sign up at the top left of the page (or directly below this post from a mobile device) to receive email updates when Football Concepts publishes new posts.