Last week we had a chance to take a look at the base philosophy of new Tennessee defensive coordinator Bob Shoop. That post (link here) detailed Shoop’s 4-3 Over front, and his attacking 1 gap scheme. What we did not look at much was how Shoop’s teams defend the pass. This post will examine the base coverage scheme in Shoop’s playbook.

Shoop’s primary pass coverage scheme is called quarters. This is a form of coverage that has become increasingly popular in recent years, and is the most common coverage in college football today.

As the spread offense began to sweep the nation, coaches began to look for a way to defend it. Offenses line up with four receivers on the line of scrimmage and threaten the deep pass, but defensive coordinators can’t afford to leave all their defenders deep because of the threat of the run game.

Nick Saban once recalled a time when he had this problem, and his story illustrates the issue well.

“We got to the point where, this is the reason that we do this, when everybody started going spread we couldn’t play three deep zone. This started with the Cleveland Browns, I was the defensive coordinator in the early 90s and Pittsburgh would run ‘Seattle’ on us, four streaks. Then they would run two streaks and two out routes, what I call ‘Pole’ route from two-by-two…

“We got to where we couldn’t run Cover 1 - So now we can’t play an eight-man front. The 1994 Browns went 13-5*, we lost to Steelers three times (twice in the regular season, once in the playoffs), lost five games total. We gave up the fifth fewest points in the history of the NFL, and lost to Steelers because we could not play eight-man fronts to stop the run because they would wear us out throwing it.”

What Saban dealt with back in 1994 is the same problem that many college coaches have today. How do we cover the deep passing routes while still having the numbers near the line of scrimmage to stop the run game? The rise of the quarterback run game has made matters worse, as the defense now needs even more defenders in the box.

The answer Bob Shoop and many other defensive coordinators have gone to is quarters. This is a coverage that is designed to do all the things Saban and coaches nationwide were looking for. Quarters is an adaptable coverage that can cover the deep passing routes, while also providing plenty of run game support.

Quarters is a zone coverage that can end up looking like man coverage depending on what routes the receivers run. Mark Dantonio, head coach at Michigan State and a strong believer in quarters, described the coverage as, “tight-man in a zone coverage with good run support that self-adjusts to various formations and routes.”

This is why quarters has become such a favorite of defensive coordinators nationwide. It is an flexible scheme that can look like either a zone or a man depending on what the offense does. The run support is strong, and the base reads and adjustments allow a defense to defend any formation or route concept.

Quarters is complex, and Shoop uses more adjustments than I have time to get into here, but here are some basic coverage rules.

The corners will align about five to seven yards off the ball. The corners will lock on to the number one receiver (closest receiver to the sideline on each side of the field) on any vertical routes. As long as the number one receiver releases vertically, the corner will carry his route. Should the receiver release on an underneath route, the corner pass him off to a linebacker. The corner must move his eyes to the number two receiver (the second receiver from the sideline) and help the safety by bracketing any vertical route.

The two outside linebackers are responsible for covering the flats in pure zone coverage. The inside linebacker will cover the hook zone over the middle. He must wall off any crossing routes. These underneath zones are where the defense is most vulnerable, but even that is by design. The defense aims to use the zone to keep everything in front and avoid giving up the big play.

The reads of the defensive backs turn quarters into a coverage that is adaptable to any route concept. This is why quarters is so popular. It is not a static, spot-dropping zone, but rather a read-and-react coverage. It can be molded on the fly to defend any formation and any route concept an offense could conceivably run.

If all four receivers release vertically, the defensive backs will carry the routes and it will look like man coverage. If one receiver runs an underneath route, the safety and corner will double the deepest receiver, and the outside linebacker will cover the route in the flat. 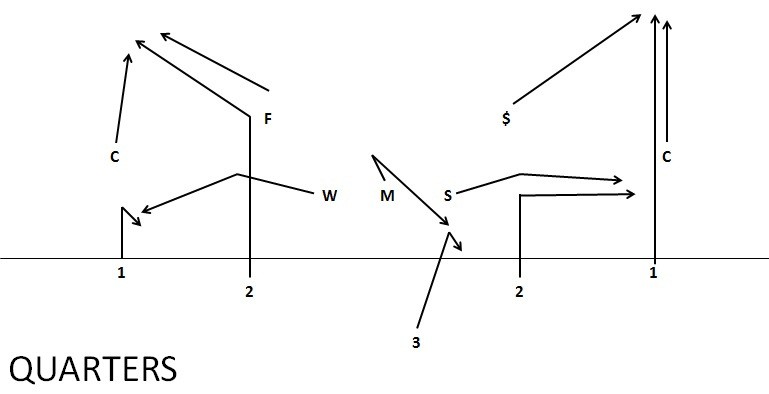 If the offense calls for a crossing route, quarters turns into a pure form of zone. Finally, quarters is also great to defend the run. Pat Narduzzi, Dantonio’s long-time defensive coordinator at Michigan State and now the head coach at Pitt, loves quarters because it allows him to use both safeties in the run game. “People talk about, ‘Man, we’re in an eight-man front.’ Well, we’re in a nine-man front.”

Narduzzi is able to get nine defenders in involved in the run game because quarters keeps the safeties reasonably close to the line of scrimmage. The defense can use both safeties in run support, giving the defense the numbers it needs to counter the quarterback run game. When the playside safety reads run, he can fly to the football and provide support on the edge.

Because the safeties do have run responsibilities, they can be susceptible to the play action pass. That is one of the drawbacks of the scheme. However, there is no way to argue the effectiveness of the quarters run defense. There is no other way to get nine run defenders while also protecting the deep pass.

Quarters is a coverage the Vols ran often under John Jancek, but under Shoop it will be the team’s base coverage. It is easy to see why this coverage has become so popular across college football. The coverage is very flexible, and is molded each snap to defend the particular route concept an offense presents, while also providing great run support.

Before his first season at Penn State, Shoop said, “I always talk about three things: A, we are committed to stopping the run; B, we don’t want to allow big plays. C, and we want takeaways. If we do those things, we will be successful.”

Quarters allows him to do all three things. The safety support puts the defense in a great spot to stop the run. The potential to have four deep defenders reduces the threat of the big play while the ability to adjust to any route combination gives the defense a good chance to force turnovers.

13 thoughts on “Bob Shoop and the Tennessee Defense - Quarters Coverage”