Over the past few weeks, we have examined the base philosophy and base coverage of Bob Shoop’s defense. The one thing we have not looked at yet is his aggressive blitz packages. Shoop is an aggressive coach. Perhaps the biggest difference from John Jancek that Vol fans will see is Shoop’s propensity to blitz.

HISTORY OF THE BLITZ

Before we can understand what Coach Shoop will be doing in 2016 and beyond, we must understand the history of blitzing. The concept of blitzing has been around since the invention of football. . To put it simply, a defense is blitzing on any play where five or more players rush the quarterback. Four pass rushers is considered the average. Any more than that is a blitz. Defensive coordinators realize that they are doomed if they can not get pressure on the quarterback. If the front four can’t get home on their own, then the defense must blitz.

Originally, if a defense wanted to blitz they would dial up a Cover 0 look. This is simply six players rushing the quarterback, and five players in man coverage. The reward and risk of the Cover 0 is obvious. By rushing six, the defense can make sure they get a free rusher. The five offensive linemen cannot conceivably block all six rushers. To block all six, the offense would have to leave a back or tight end to block, freeing up a coverage player to blitz. Numerically, the defense can always rush more player than the offense has blockers.

However, the pass coverage in Cover 0 is very weak. All five coverage players are isolated with a receiver. One misstep by a defensive back could mean points going up on the board. With no deep safety help, defenders are put in a very difficult position. Even the very best corners, such as Cam Sutton, will get beat when they never have safety help.

This also means that a missed tackle could be devastating. After a pass is completed, only one defender will be in position to make the tackle. If he misses, it could be a while before the defense can get the runner to the ground.

Cover 0 is the defense going for boom or bust. Sack the quarterback or give up a big play.

Because of the risks, most defensive coordinators avoid it today, except for a few specific situations (such as on the goal line, where safety help is less necessary, or versus a Wildcat formation, where the threat of the pass is minimal).

A NEW WAY TO BLITZ

In the 1980’s Bill Walsh began to set the NFL on fire, running his offensive scheme to perfection with the San Francisco 49ers. Walsh’s West Coast offense, as it was called (Bill Belichick correctly noted that it probably should’ve been nicknamed the Ohio River offense since Walsh, along with Paul Brown,  developed it with the Cincinnati Bengals), was built around a very quick, ball control passing game. Rather than risk deep downfield passes where the chances of a completion were low, Walsh stuck with quick hitters that were sure fire completions for his quarterbacks. By giving his quarterbacks easier passes, Walsh increased the efficiency of his offense. Interceptions were at a low and completions were at a high. The ball kept moving downfield with the safe throws.

So it you can’t get pressure, what do you do? Blitz, right? Wrong. Defenses that blitzed Walsh with Cover 0 got shredded. Joe Montana was able to get the ball out to his receivers on their short routes before even a six man pressure could get to him. The receivers, isolated in one-on-one coverage, could easily get open on the shorter routes. Defensive backs were too worried about getting beat deep, since they had no safety held, and gave up the quick hitters. Walsh and his scheme effectively destroyed the use of Cover 0 in base defense.

If you study the history of football, you will often see offensive trends evolve to counter the latest defensive trend and vice-versa. This instance is no different. In the mid-80’s, Walsh’s West Coast scheme was all the rage in the NFL. Defensive coordinators knew they needed an answer, and fast.

Rather than play man coverage behind the blitz, Arnsparger devised a way to get what he called “safe pressure” on the quarterback by playing zone behind the blitz. Arnsparger would rush five, often including two or more linebackers or safeties, with one or more defensive linemen dropping to defend an underneath zone.

LeBeau brought this scheme to the NFL, and it confounded quarterbacks. When the signal caller would drop back and see linebackers blitzing, he would turn to throw a quick hitter to the opposite side. To his surprise, a defensive end would be dropping right into the passing lane.

LeBeau’s favorite zone blitz was the fire zone. The fire zone is a pressure that calls for five pass rushers. The defensive coordinator is only limited by his creativity in which five defenders he chooses to rush. Three defenders will play underneath zones (flat, hook, flat), while three more will cover the deep thirds. 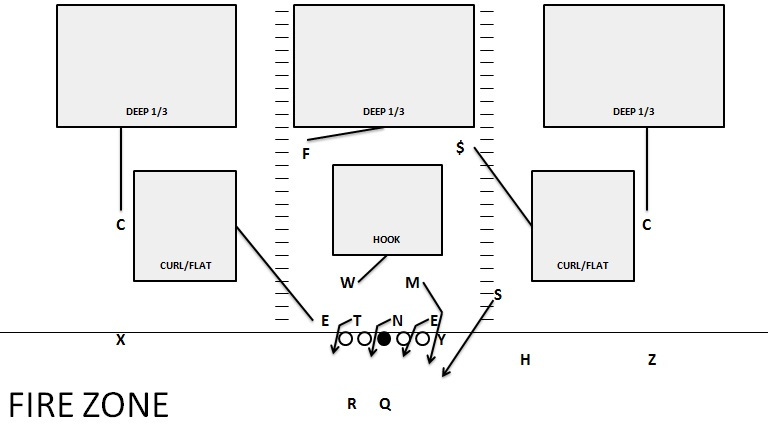 This enabled LeBeau to get “safe pressure.” The fire zone had all the benefits of the Cover 0, but without the risk. The defensive coordinator could send five pass rushers and get pressure on the quarterback. The zone coverage was significantly safer than the pure man with no safety help. The three deep defenders effectively take away any vertical routes. The underneath defenders are able to rob any “hot” routes designed to beat the blitz. With six defenders in zone coverage, the defense can keep everything in front of them. Even if the pass is completed, the secondary can rally to the ball and make the tackle for a short gain.

So, what does this mean for Bob Shoop at Tennessee? In his introductory press conference at Tennessee, Shoop said, “We’ll be an in-your-face style of defense that’s built on relentless pursuit and never-ending pressure.”

“Never-ending pressure” is a common theme if you watch Coach Shoop’s defense. His priority is to be the aggressor. He wants to put the pressure on the offense, and will blitz to make that happen.

Last week we looked at Shoop’s base coverage, quarters. If quarters is Shoop’s base coverage, then the fire zone is his top changeup. When Shoop wants to dial up some pressure on the quarterback, the fire zone is what he’ll go to. He will use it early and often. At Penn State, Shoop liked to use the blitz on base downs (first and second down) in order to stop the run. The five man blitz is gap sound. Just like every other play, each front seven defender is responsible for a single gap in the run game. With three deep zone defenders, Shoop can roll the strong safety and get an eight man box.

The fire zone will also be a common answer on third downs. Shoop doesn’t want to just drop back and give the opposing quarterback time to pick his secondary apart. Shoop has a variety of fronts and blitz packages he will use on third down. The beauty of the fire zone is that the defensive coordinator can use any five players as pass rushers. The corners and free safety usually take the three deep zones. Beyond that, Shoop will be creative with his fronts and with choosing which of the remaining eight defenders will blitz or play coverage.

In an extreme example, Shoop dialed up a blitz package against Georgia in Penn State’s bowl game where all three defensive linemen into coverage and all four linebackers rushed the quarterback. This is the kind of stuff Vol fans should get used to seeing. Shoop loves to use exotic blitz packages, so the offensive line and the quarterback will be unable to know who is rushing until it is too late. Shoop will use a variety of fronts in passing situation, some with four defensive linemen and some with only three, and a variety of blitz packages to keep the offense off guard. Athletic second level players like Jalen Reeves-Maybin and Darrin Kirkland Jr. should thrive in this system where they will get to show off their speed as blitzers.

When you look at what Shoop wants to do with the defense, the fire zone fits perfectly. “Our formula for success, it’s stood the test of time whether it’s the Tennessee Titans, whether it’s the Vols, whether it’s the local high school. Stop the run. We’re very committed to stopping the run, eliminating any and all explosive plays, and create takeaways. That’s an area we think we can do better in. We want to be disruptive. We want to get after the quarterback. We want to create tackles for loss, something we were very good at last year at Penn State.”

The blitzing tactics makes the fire zone a very safe play in the run game, with players flowing downhill, all responsible for one gap. The safe coverage can eliminate the big plays, while the pressure on the quarterback can increase turnovers.

15 thoughts on “Bob Shoop and the Fire Zone”