Coming in at number 34 in our countdown of the best plays in Tennessee’s 2015 season is Josh Dobbs’ touchdown pass to Preston Williams.

Preston Williams came to Knoxville with a lot of hype. The five star recruit was ranked by 247Sports as a top 30 player in the nation, and the number three wide receiver. The 6’4” receiver had it all – the speed to get open downfield, and the size and leaping ability to go get the ball over the defender.

To some degree, Williams’ freshman season was marked by inconsistency. The rookie was unable to join the team until late August because of issues over an ACT score, and a hamstring injury caused him to miss four games in the middle of the season.

However, when he was able to get on the field, Williams flashed the potential that made him a five star recruit. The receiver was named SEC Freshman of the Week for his performance against Western Carolina, and his 41 yards against Georgia helped the Vols to a come-from-behind victory.

Perhaps the biggest play Williams made all season was the first catch of his collegiate career. On the Vols’ first possession of their game against Western Carolina, Josh Dobbs sent a beautiful spiral down the sideline to Williams for his first catch and first touchdown as a Vol.

The Vols ran a play called three verticals. This is as simple as it sounds. The Vols called for all three wide receivers to run vertical routes downfield. The two outside receivers, Preston Williams and Josh Malone, ran fade routes. The slot receiver, Jauan Jennings ran a post route over the middle.

To make sure that Dobbs had time to throw, Tennessee used a max protection scheme. The offensive line, along with tight end Ethan Wolf, slid to the left, while Jalen Hurd stepped up to protect the right edge.

Here is a basic description of the Fire Zone from my previous article:

LeBeau’s favorite zone blitz was the fire zone. The fire zone is a pressure that calls for five pass rushers. The defensive coordinator is only limited by his creativity in which five defenders he chooses to rush. Three defenders will play underneath zones (flat, hook, flat), while three more will cover the deep thirds. To keep things simple, a Fire Zone is a five man pressure with three deep zone defenders and three intermediate zone defenders. This is the play Western Carolina dialed up, with the weakside defensive end dropping into coverage and the middle and weakside linebackers blitzing. The first aspect of this play is the pass protection. With a blitz on, the Vols’ pass protection has to hold up, or else Dobbs won’t have time to throw deep downfield. As you can see in the screenshot below, the line did an outstanding job. The seven man protection scheme was able to hold up against the five man rush. The right side of the line didn’t give up any pressure versus the blitz, while left tackle Kyler Kerbyson was able to win one-on-one versus the edge pressure. This left Dobbs with all day to throw. 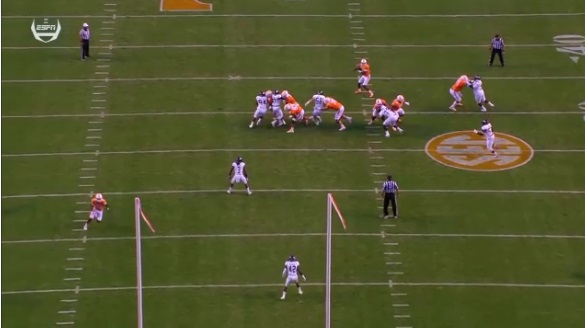 In this case, Dobbs saw that the WCU’s free safety was lined up over the middle of the field, so his read was MOFC.

If the free safety had aligned outside the hash in a split safety look, Dobbs would’ve made a MOFO read, and his first option would’ve been Jennings, running to open space over the middle on the post route.

What this play comes down to is the receiver versus the corner. Of course, Dobbs has to throw an accurate ball, but the success or failure of this play will be determined by Williams. He must beat the corner downfield, find the ball in the air, and go up and snag it over the defender. This play never works if Williams can’t win his one-on-one matchup.

Did Williams win the matchup? You be the judge.

This is just a great catch. Williams does an outstanding job of adjusting to the ball in the air, and then going up to snag it with both hands.

Plays like this are what get Vol fans excited about Williams going forward. From a purely physical standpoint, Williams has more talent and athleticism than any receiver on the roster. Even though his freshman season was hampered by injuries, his potential showed up many times, including on this play. In 2016, fans and coaches alike are hopeful that Williams can take the next step in his development and become a dominant player outside for the Vols.

Williams’ big catch over Western Carolina was good enough to help him win SEC Freshman of the Week, and is good enough for number 34 on our countdown of the top plays of 2015.

Be sure to check back in next week for play number 33. Also, be sure to like Football Concepts on Facebook by clicking here.