In their 27-0 win over the New York Giants, the Philadelphia Eagles had success by showing some new looks on offense. Head coach Chip Kelly always does a very good job at making small adjustments to his offense to attack each specific defensive scheme. This game was no different, as Kelly pulled out a brand new run play, brand new formation, and a rarely used pass play to attack the Giants.

One of the most successful additions to the playbook was a counter run play. This play was not a traditional counter with a gap blocking scheme and pulling linemen. Instead, the Eagles used their traditional inside zone blocking scheme and had the running back run the opposite direction. By doing this, Philadelphia tricked the Giants linebackers into attacking their gaps to defend inside zone, when in reality the ball was going in the opposite direction.This play is sometimes called H-Reverse, because it is kind of like a reverse in that the ball is being faked one way but then hits the opposite edge.

The first time Philadelphia ran this, they lined up with a tight end to the left and the line blocked for inside zone to the right. Receiver Josh Huff motioned in from his outside receiver position and his job was to seal off the strongside linebacker. 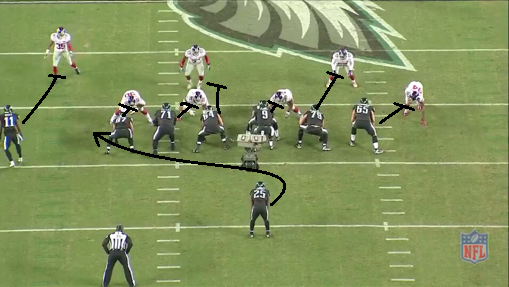 Running back LeSean McCoy and quarterback Nick Foles both went to the right to start the play, and Foles even extended the ball out as if he was going to make a handoff. The linebackers read this and ran downhill to stop the inside zone. Foles and McCoy then reversed course, and McCoy took the ball running to the left. His running lane was wide open and he gained 18 yards on the play. Later, Philadelphia went back to this play. This time they lined up with two tight ends to the right and ran the counter towards them. Everyone blocked as if it was zone to the left. Because the Giants had 8 in the box, there was one unblocked defender McCoy would have to beat himself. 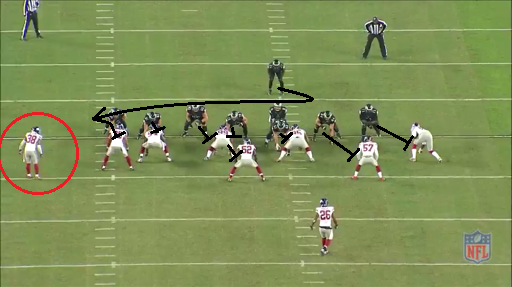 Just as before, the linebackers ran to the zone side when Foles and McCoy executed their fake. The line did a excellent job sealing off the lane for McCoy. The unblocked cornerback, Trumaine McBride, came down and was one on one with McCoy in the open field. McCoy made McBride miss the arm tackle and he was off and running for a gain of 18.This is a really nice addition to Chip Kelly’s offense for a variety of reasons. H-Reverse is the perfect counter to inside zone. The blocking scheme is essentially the same and Foles’ fake handoff to the zone side was very convincing to the defense. But the run hits where the defense is least expecting it. Even when the Giants put extra men in the box, McCoy was getting favorable matchups on corners and safeties rather than linebackers and defensive linemen like he has been in recent weeks. Philadelphia gashed the Giants for 12.4 yards per carry (62 total yards) on 5 attempts at this play.

This play was not the only new addition to the offense versus the Giants. Kelly is one of the best in football at making small adjustments to his scheme on a weekly basis as part of the gameplan. Every week, the Eagles seem to have one formation, play, or series of plays they have not run all season, and often will not run again all season. This is effective because it gives the defense a look they have not seen before on film, and therefore they can not prepare for it.

Early in the first quarter, the Eagles showed a formation they had never shown before. Right tackle Lane Johnson moved over to the left side in a tackle over formation, and tight ends Brent Celek and Zach Ertz lined up to the right. A third tight end, James Casey, lined up as the split end to the left, but lined up split tight to the line. Foles was under center and McCoy was in the backfield behind him.

The Eagles blocked this play like they would a pin-and-pull sweep, with one exception. Casey crack blocked the weakside linebacker and Johnson pulled to block the cornerback.

McCoy was able to get to the outside and pick up four yards on the play. 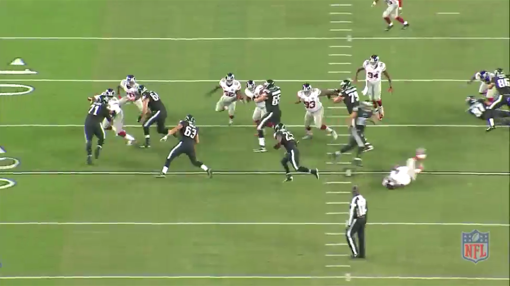 Overall, a four yard gain is a solid run but it isn’t all that impressive. The counter Kelly called to this play is what makes it special. After running the sweep from this formation twice, Kelly called for the formation again in the second quarter.

This time, the Eagles went over the top on a playaction pass. Casey ran towards the linebacker as if he was crack blocking again, but instead ran a deep crossing route. Ertz faked a block then released into the flat, while receiver Jeremy Maclin ran a comeback route. The line did an excellent job selling the fake. Everyone was moving to the left as if it was a sweep, while left guard Matt Tobin and center David Molk even pulled out to make the play look like a run. This had a great impact on both safeties. They both flowed downhill hard to defend the run and Casey was able to get behind them. The corner recognized pass, but obviously was playing some form of zone coverage and was expecting safety help. With the safeties out of position, Casey was wide open for his first Eagles touchdown.This playaction pass is not a special play in and of itself, but by using a new and unusual formation and personnel grouping, the Eagles were able to keep the Giants off balance. With the three tight end formation, the Giants were concerned about getting to the edge to stop the run and it left them very vulnerable on the back end. New York had no idea that Kelly was calling for a deep playaction pass because the Eagles had never shown this look before.

One last play the Eagles used as part of their gameplan for New York is called spacing. Philadelphia has run spacing before, but generally speaking they do not call it often. However, Kelly recognized that the Giants play a lot of deep zone coverages so he made spacing a key part of the gameplan.

Spacing is a simple route concept. Three receivers run quick hitches, and two receivers run to the flats. The point of this play is to put a horizontal stretch on a zone defense. When the offense has all five receivers on short routes, a defense that is dropping multiple defenders deep into zone will not have enough defenders to take away all the quick receiving options.

To run this play, Philadelphia lined up in a double wing formation with both receivers split tight. The route concept, as described above, was simple.

Here, Philadelphia caught the Giants in a deep zone, and Foles hit Maclin for an easy completion. This game highlights to me how good of a job Chip Kelly does at gameplanning for opponents. The running game had struggled in recent weeks, so Kelly added H-Reverse to take advantage of an overaggressive defense and get McCoy in open space. The playaction off of the new heavy formation was very effective in catching the defense off guard. Kelly used spacing and a few other passing concepts to attack the Giants zone coverage scheme. There are a lot of other plays that could’ve been highlighted, but these three sets of plays jump out to me because of how successful they were and how they had never (or not often in the case of spacing) been shown before.

One thought on “All-22: How did Kelly Gameplan for New York?”