Last week, James Casey blocked a punt and Chris Maragos returned it for a score. The week before, Darren Sproles ran a punt back for a touchdown and a Trey Burton blocked punt led to a Brad Smith touchdown. Three weeks ago, Chris Polk took a kickoff all the way for a score.

While the Philadelphia Eagles failed to score a touchdown on special teams versus the New York Giants, they still had a few big plays in the kicking game. Philadelphia’s special teams has become perhaps the brightest shining spot on a 5-1 team and ranks as one of the best in the league.The Eagles two biggest plays against the Giants both came from the punt return team; first when Darren Sproles returned a punt 43 yards, and second when Chris Maragos partially blocked a punt.

The Eagles first big play came midway through the second quarter. Steve Weatherford of the Giants lined up to punt the ball from the Giants 37 yard line. Philadelphia lined up with seven men in the box, two vices on the left gunner, one vice on the right gunner, and Sproles deep to return.
While they sent seven after the punter, no one was able to get off to a good jump, so the Eagles players dropped to set up the return. Right off the bat, three things jump out to me about this play. First, vices Josh Huff and Jaylen Watkins do an incredible job of forcing the left gunner to the sideline and keeping him completely out of the play. Watkins got the original block, but both rookies worked together to control the defender. (Remember Huff’s name; he will come back in the play later). Next, Malcolm Jenkins got an great block on Giants left wing Larry Donnell. Jenkins was able to control the block and keep Donnell well behind the play. Finally, the other Eagles blockers do a really good job setting up their blocks. They are all on the inside shoulder of the man they are to block, in trail technique, and you can already see the open lane forming.
When Sproles catches the ball, he is facing the right gunner one on one in the open field. But we can see that if he can make this first man miss, there is a giant hole ready for him to run through. James Casey and Trey Burton are both setting up key blocks to create the running lane.

Sproles did what he does best. He avoided the defenders’ tackle and then he was off and running. Burton was able to get a knockout block on New York long snapper Zac DeOssi. Burton did a really good job of taking the correct angle to get the knockout blow and avoid a block in the back. Maclom Smith was blocking the next Giants defender in Sproles’ path, and he did a really good job to turn himself around, get a good angle, and finish his block. Sproles was left with only Donnell and the punter in his path with Jenkins as his lead blocker.

We also get to see incredible effort by Josh Huff. He has sprinted all the way back and is now in position to make a block for Sproles.Huff is able to cut back and make a fierce knockout block on a Giant. Excellent effort by him and a great finish.

Sproles had the angle to get around Donnell and score, but when he cut it back he ran into Jenkins and was tackled. Sproles ended up with 43 yards on the return and it set up an Eagles field goal. Even though he was unable to get the ball all the way into the end zone, this was a great play by the Eagles special teams unit. Four rookies, Burton, Watkins, Smith, and Huff, specifically jumped out with some great blocks.

A few minutes later, the Giants lined up to punt again. This time, Philadelphia showed an eight man rush, but dropped two men off to block and only rushed six. The Giants used a basic zone protection with the long snapper sliding to the right and the personal protector blocking to the left. The key player for the Eagles is Maragos, who is rushing through the right C gap. Giants right tackle Mark Herzlich is responsible for protecting this gap. Herzlich is a little too eager to get out into coverage and it ends up costing the Giants. Rather than making a full block, Herzlich just chips Maragos and then let’s him run free. 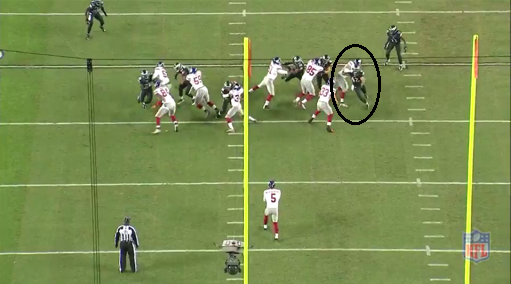 As Weatherford is dropping the ball, Herzlich is running downfield, and Maragos is running free at Weatherford. Maragos extended his arms through the block point and was able to tip the ball.Maragos was only able to get a partial deflection, not a full block, but the tip greatly impacted the punt. The ball only went 34 yards and that put the Eagles in prime field position.

Even though they didn’t get on the scoreboard themselves, the Eagles special teams set up great field position for the offense with outstanding execution. Chip Kelly, Howie Roseman, and Dave Fipp have done an outstanding job upgrading the Eagles kicking teams and it is really fun to watch